From beachside mountain ranges to bustling cityscapes and all the way to the north into the Amazon basin, Brazil contains incredible environmental diversity. But wherever you decide to roam, one factor will remain constant: your close proximity to a sip of refreshing and complex cachaça! Nearly all awareness of the spirit, until recently, came from its most revered concoction, the caipirinha. But now with substantially increased availability and a fast-growing admiration for its depth of flavor, cachaça has gone global, with bartenders everywhere getting in on the fun and using the spirit in new and interesting ways.

All cachaças start with the distillation of fermented sugarcane juice. But from that point on, there are choices to be made that account for a wide variety of styles. The spirit can be aged for varying lengths of time in barrels made from dozens of different wood types, some of which are unique to Brazil—or forego aging altogether. Its overarching characteristics, regardless of the path taken to get there, are green flavors of grass and flora mixed with rich dried fruit and subtle spice—a perfect base for bright, tropical flavors.

So shine your samba shoes and listen for the booming beat of the hand drums because this month, all signs point to Brazil for an adventure that most certainly will end with you boasting Eu Amo Cachaça! Subscribe now through August 3rd to get this box—it’ll ship the week of August 6th.

Hop in the back of Sam Treadway’s buggy as he zooms down from Rio de Janeiro to Santos, a route that features mountainous terrain butting right up against the picturesque Atlantic coastline. Mirroring this landscape and the nuanced green flavors of cachaça, his Costa Verde cocktail hits several notes at once, from vegetal and herbal to tropical and tangy. Shake up and serve this daiquiri-inspired combination of cachaça, pineapple-basil shrub, lime, and celery bitters and you’ll be transported to an environment that’s every bit as impressive and fun as its signature spirit.

Sam has bartended all over the country, from Boston to Seattle, Minnesota, Hawaii, and more. He now owns backbar, an off-the-beaten-path craft cocktail bar in Somerville, MA, and lives nearby with his cat, Muffuletta. 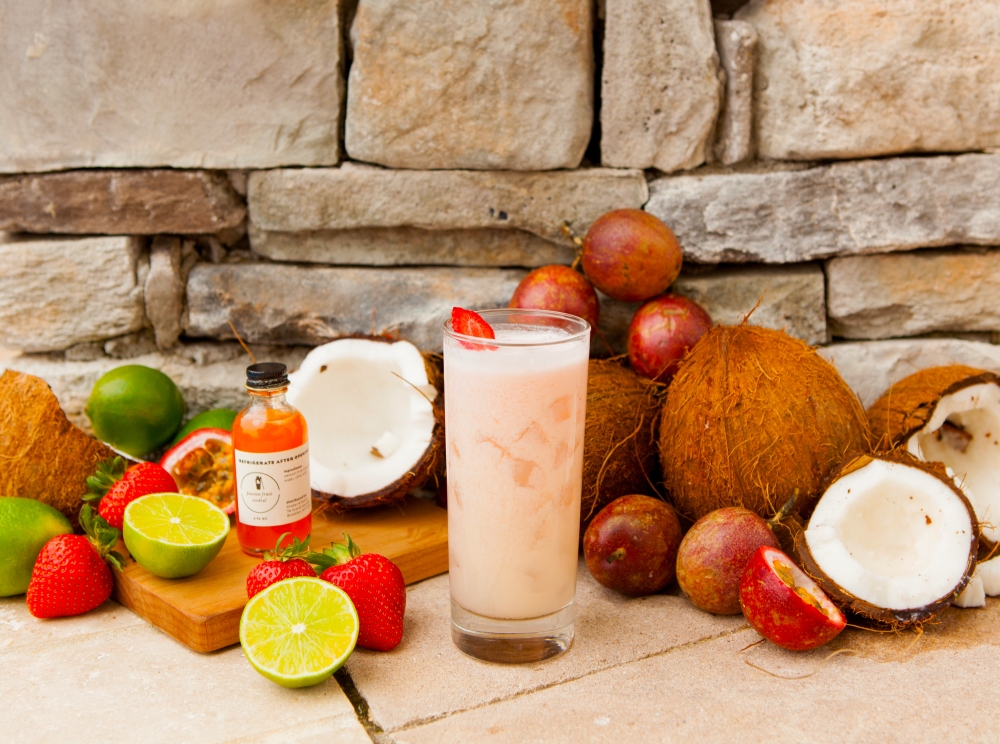 Soaking up the sun, swimming, and sipping on something creamy, fruity, and icy. What may sound like a tongue twister to some is one of the better ways to spend a day for many! While a relatively unfamiliar cachaça cocktail, the batida is a perfect partner with which to lounge around. Jacyara de Oliveira has taken the traditional elements of this drink—fruit, cachaça, cream—and turned up the dial with her Batida Rosa. Starting off with a quick strawberry infusion creates a flavorful base for lime juice and a bold passion fruit cordial. It makes for a magnificent medley of freshness all united by the cooling creaminess of coconut milk.

Jacyara has been in Chicago’s beverage industry for the last seven years at places like The Drawing Room, Nico Osteria, and Sportsman’s Club. She’s won several awards, including the Jean Banchet Award for Best Mixologist, and been recognized as one of Food & Wine’s Rising Stars as well as Women to Watch.

Listen closely and you’ll hear a beautiful tune emanating from the jungle, an uplifting melody that highlights a lesser-explored side of cachaça. While it’s often sipped with bright citrus in the mix and the beach in mind, the spirit’s richer qualities are the focus here in Jen Akin’s Banana Banjo. Spiced banana syrup harmonizes with cachaça’s earthy flavors while enhancing its tropical qualities and evoking cozy sense-memories of freshly baked banana bread. Stir this syrup with cachaça and Angostura bitters over ice, finish with a spritz of lemon oil, serve it up and keep the music flowing!

Jen is the general manager, rum curator, and in-house mint whisperer at Rumba in Seattle. She grew up in Kansas where she learned how to drive stick shift on a John Deere tractor.

For some behind-the-scenes tidbits from Jen on her work at Rumba, Seattle’s cocktail scene, and the creation of her drink, check out our interview.

This month we’re hitting the road for a tour of Brazil, a land of striking beauty and rich culture, with its national spirit guiding the way. So join us in declaring Eu Amo Cachaça!