Oh, amaro, that dark, often bitter beloved of bartenders the world over. Why such strong feelings? Perhaps because it’s complex, mysterious, and misunderstood . . . like an irresistible bad boy (though luckily this one can be tamed). What is amaro, anyway? It runs the gamut from intensely bitter and medicinal all the way to fragrant and candy-like, and has been lauded as a hangover cure, considered the bartender’s handshake, and was the only spirit category allowed under Prohibition (as medicine)!

Amaro has recently made its way into the realm of craft cocktails and, with such variety of flavor between brands, presents a unique challenge but also adds a depth and complexity that we hope you’ll enjoy in November’s That’s Amaro! Box. Subscribe now through November 1st to get yours! It’ll ship the week of November 6th. 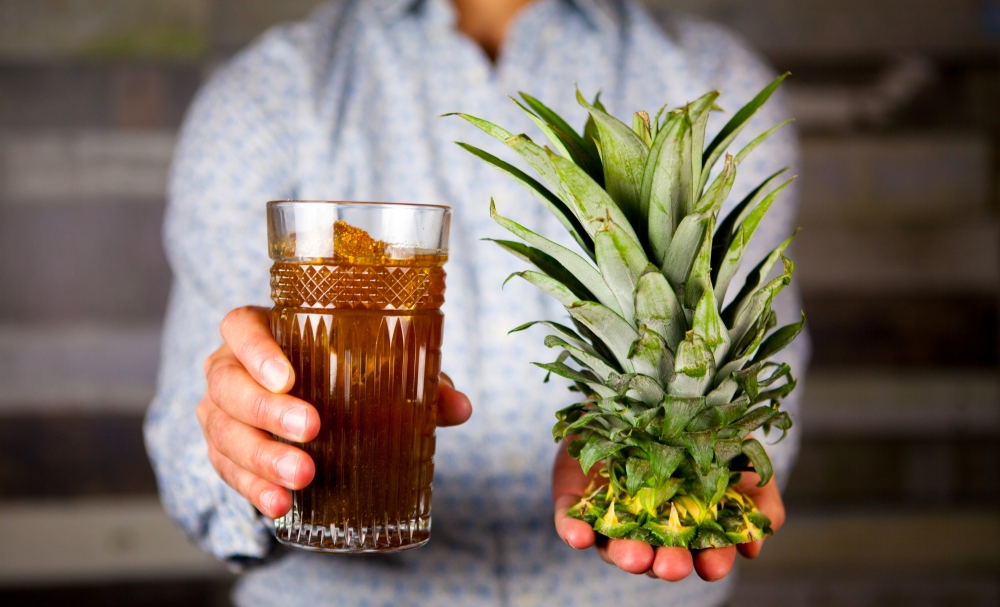 The Last Chance Nance from Jacyara de Oliveira is a deceptively simple, refreshingly tropical cocktail with warmth that will whisk you away and make you feel like you’re back in the heat of summer (but without all the sweating and with prettier foliage) while still preparing you for the bracing winds of winter. Enjoy the combination of lemon, pineapple, and ancho chile, topped with a dusting of freshly grated nutmeg.

Jacyara has opened bars in Chicago and Seattle and currently runs the bar at the newly opened Beatnik. She’s one of the founding members of the Hubertus Circle Chicago chapter. 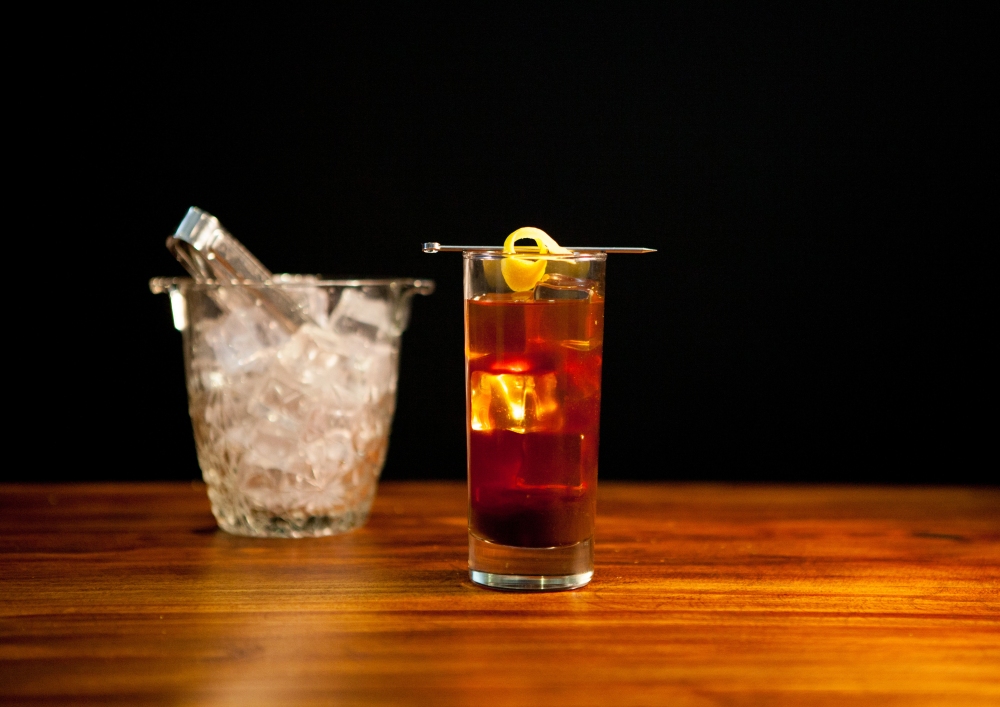 The Vino Labbra, which translates literally to “Wine Lips,” is reminiscent in color of the stains left on one’s lips after a third glass of wine. Carla Rivera created this cocktail with a strawberry-mint shrub and grapefruit-lemon oleo saccharum sour that lighten and brighten the amaro to make it immensely approachable for pretty much anyone. She aims to awaken feelings of nostalgia and pleasure by preserving the flavors of summer and unleashing them as we transition toward winter.

Shrubs (or vinegar-based syrups) were at the height of their popularity in the seventeenth and eighteenth centuries as a way to do just that—enable the use of fruit flavors in the off-season! (They were also used to mask the taste of liquor contaminated by seawater, the result of smugglers sinking barrels offshore to avoid important taxes, but that’s a whole other story.) By the late 1800s, other preservation techniques were developed and shrubs fell out of favor—but now they’re back and ever more delicious!

Oleo saccharum, another old-school ingredient, was used during the nineteenth century in cocktails and punches to add an elegantly citrus flavor and aroma to drinks. Literally meaning sugared oil, it’s created by using sugar to extract both the citrusy oil and the bitterness of the citrus zest—a fun challenge to attempt at home if you’ve got some time.

Carla, a long-time bar manager and lead mixologist, is currently bringing her passion for cocktails to Southern Glazers Wine and Spirits as a brand ambassador and mixologist. She plays an active role in the US Bartenders’ Guild Miami Chapter and was a top 15 finalist in the US at the Diageo World Class Cocktail Competition in 2014.

For more from Carla on her work, her love of low-ABV drinks, and details behind her cocktail (plus recommendations for food to pair with it!), check out our interview. 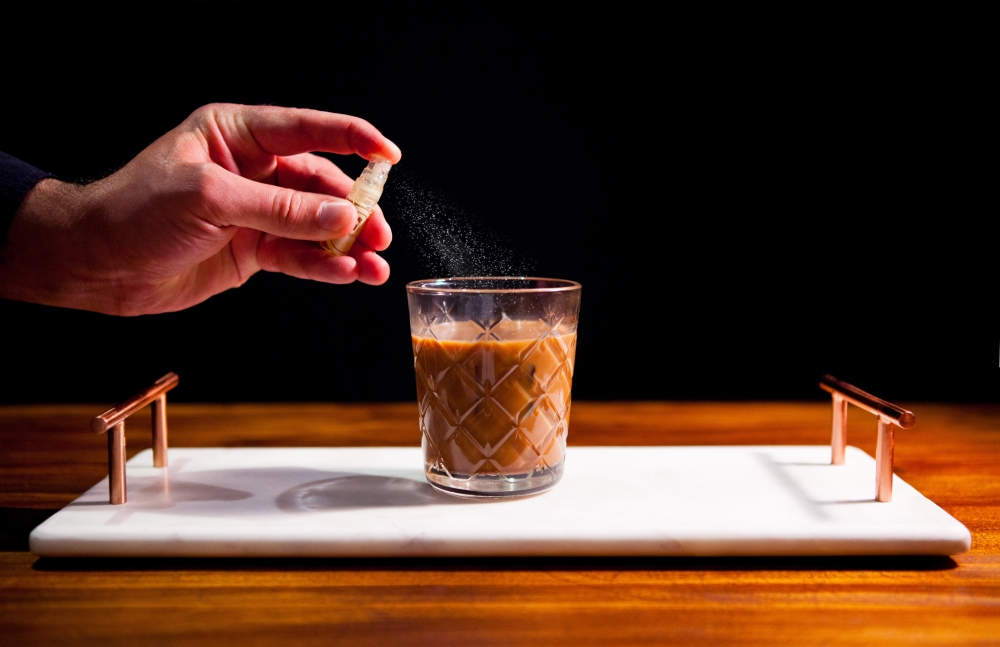 Going skiing later this season? You’re in luck! While you’re out enjoying those slippery slopes, you can look forward to imbibing some Slippery Slopes, a delightfully rich-on-the-palette concoction from Sother Teague. Cold brew, house-made spiced hot cocoa mix (which contains powdered milk—so this cocktail’s not vegan), toasted coconut syrup, all topped with a spritz of orange oil—what could be cozier? (And if you prefer a hot beverage après snow romp, you can serve this in a mug with 2 ounces of hot coffee instead of the cold brew!)

Sother—current beverage director at Amor y Amargo and Coup in NYC—is also the founder of BATCH (an app for spirits industry professionals and enthusiasts), president of the US Bartenders’ Guild NY Chapter, and co-host of The Speakeasy (a podcast from Heritage Radio Network).

For some behind-the-scenes tidbits from Sother on his work and his cocktail (plus recommendations for food and music to pair with it!), check out our interview.

Go beyond sipping an amaro as an apertif or digestif—try this box to see why amari are all the rage in the cocktail scene and let us surprise you with flavors you might not expect!